Tropical plants for any climate 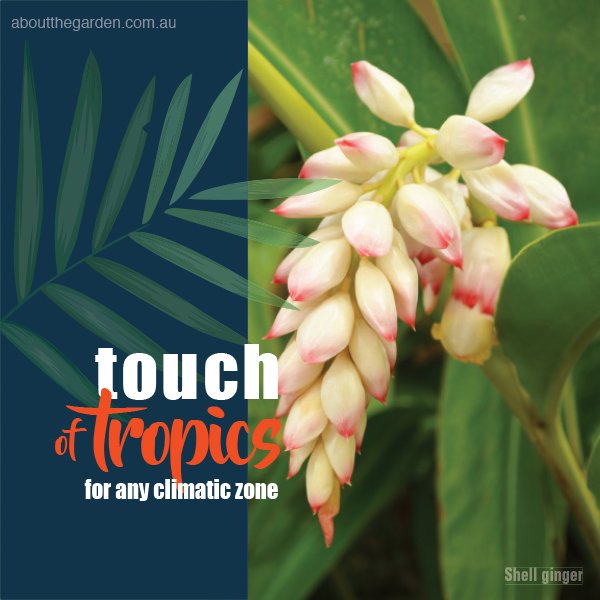 These tropical-like plants are not limited to just the warmer parts of Australian gardens, their hardiness makes them a viable option for cooler zone gardens to obtain a tropical paradise.

For many people, the allure of a tropical garden bursting at the seams with lush foliage plants is something that easily captures the imagination from the avid long-term gardeners to beginners.

There is something about tropical gardens that evokes intrigue and mystery and what we commonly view as potted (indoor) plants become the main focus of the garden as they provide structure and colour and a feeling of coolness on those hot summer days. This style of garden can provide a sense of tranquillity and peacefulness throughout the year as the demand for flowers is somewhat reduced and a stronger emphasis is placed on their individual form and sometimes delicate leaf patterning.

Although many of the foliage plants that we visually connect to this style of garden originate from the steamy jungles in South America or Asia or the rainforests of Northern Australia, most rely on high levels of humidity and rainfall to sustain their lush appearance. Yet there are still many worthy plant choices that can equally provide a similar look and form and whose water consumption is considerably less allowing them to be a little more easily sustainable in today’s water conscience world.

You don’t always need a large garden to capture this look in your garden. In fact creating a tropical atmosphere can be done on any sized block and can extend to patios, verandas and also balconies.

One key element when trying to recreate a tropical garden at home is to plant a little closer together than what would normally be considered. Filling up dark corners and garden edges will instantly provide a feeling of fullness to your garden space.

It’s always helpful if you happen to have a few medium sized trees in your garden that can provide some light protection from their canopy from the intense summer sun or even light frost during the winter depending on your location.  In nature, most of the tropical plants we associate with this style of garden play the strongest role as part of the understorey plantings. The dappled light helps to bring out their best features and a certain “gloss” to their leaves. 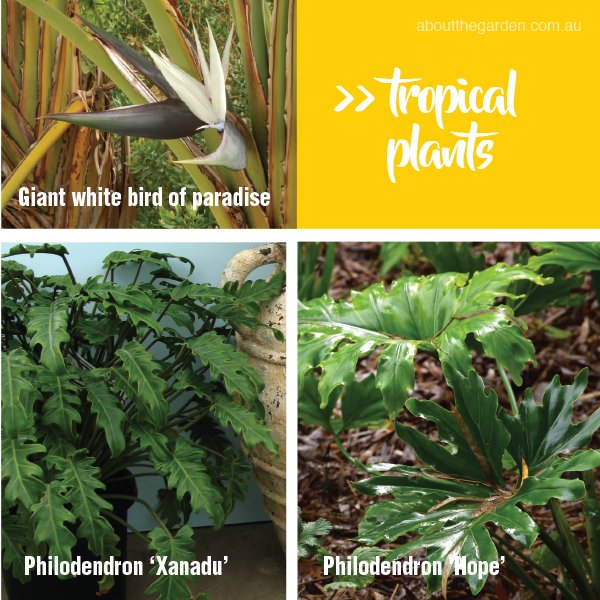 If you don’t have trees, then a great option could be the use of the Giant white bird of Paradise, (Strelitzia nicolai). This large growing species produces broad banana-like foliage that can act as a good shade provider and background plant. Due to its full size of around six metres, these are best if planted directly into the garden if you have room, as they underperform with the restrictions of pots. Strelitzia Nicolai can also be used to great effect if planted as a privacy screen around pools or to soften hard surfaces such as high walls and fences. As they mature, large deep blue to black buds are formed from within the leaf axils where white and blue flowers attract nectar loving birdlife. The giant white bird of paradise is easily grown all along the east coast of Australia and has great tolerance for drought once fully established.

One of the easiest of all plants would be members of the Philodendron family. There are so many members of this genus on the market these days and most are highly adaptable to varied climatic conditions. Their natural ability for drought tolerance accompanied with their lush foliage appearance makes them number one on the list for an addition for a tropical style garden.  One of the best forms would be Philodendron selloum x ‘Hope’. This is a more compact version of the older and much larger style Philodendron selloum (bipinnatifidum) yet has smaller, less deeply-lobed leaves than its larger sibling. This is a medium sized grower to around 1.5 metres x 1.5 metres with wavy foliage and is very dependable even in cold climates where it can tolerate near freezing temperatures.  Another is the old faithful, Philodendron ‘Xanadu’. In frost fee zones, ‘Xanadu’ can be adapted to grow out in the full sun if required, but in most areas its best to keep them slightly undercover and away from intense afternoon sun. Xanadu is also highly adaptable to cooler growing conditions but is a little less frost tolerant that Philodendron ‘Hope’.

The ginger family is wide and entire gardens can be created simply by using this one genus alone. One of the easiest and hardiest of all is Shell ginger (Alpinia zerumbet ‘variegata’). This reliable species of (ornamental) ginger still graces many older style homes in sub-tropical areas, yet is well adapted to grow in cooler regions where its golden splashed foliage can bring a spark of excitement to a lightly shaded space. Both the large and dwarf forms of this old timer can produce gentle clusters of intricately patterned apricot and white flowers at the end of its arching branches. Removal of the entire branch after flowering to ground level is the easiest way of ensuring that a lush well-formed plant is maintained. 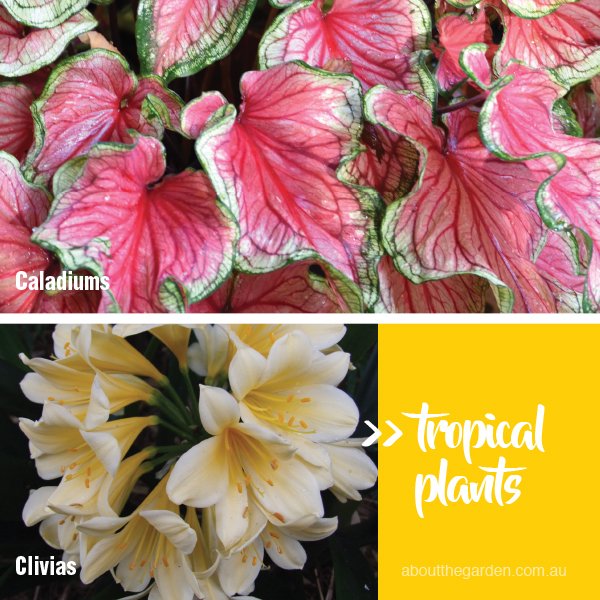 Although not generally suited for warm or sub-tropical zones, the herbaceous Hosta (Hosta sieboldiana) or Plantain lily is something extra special for the cool climate gardener. This cold loving genus has an enormous following in many temperate parts of the world with many hundreds of hybrid cultivars displaying varied forms of colourful foliage from golden, steel blue, variegated, miniature and giant leaf forms. Dormant through the winter months, Hosta emerge from the ground with the warmth of spring and summer as they unfurl their beautiful foliage to take their place in the garden for yet another growing season. Gardeners in the subtropics shouldn’t lose hope as an even brighter (warm climate) equivalent can be used in the way of Caladiums (Caladium bicolour). Better known as ‘Bleeding hearts’, this gorgeous group of deciduous tropical bulbs also emerge with the warmth of spring and summer and bring intense colour to any tropical inspired garden.  Apart from different climatic temperatures, Hosta and Caladiums both require similar growing conditions with dappled light to shady corners in well-drained soil. As the new leaves are pushed through at the beginning of the growing season, both require adequate protection from slugs and snails as it is at this point in their growth cycle that they are at their most vulnerable for attack. As both are fully herbaceous and disappear completely over winter to an underground  bulb, it is sometimes a clever option to grow these in their own display pots where gardeners will always know where the bulbs are and not view an empty spot in the garden as an opportunity to (mistakenly) plant another plant over them. The pots in themselves can be utilized as part of the tropical garden theme, so take the time to pick something that can still remain a visual feature while the plants are dormant. 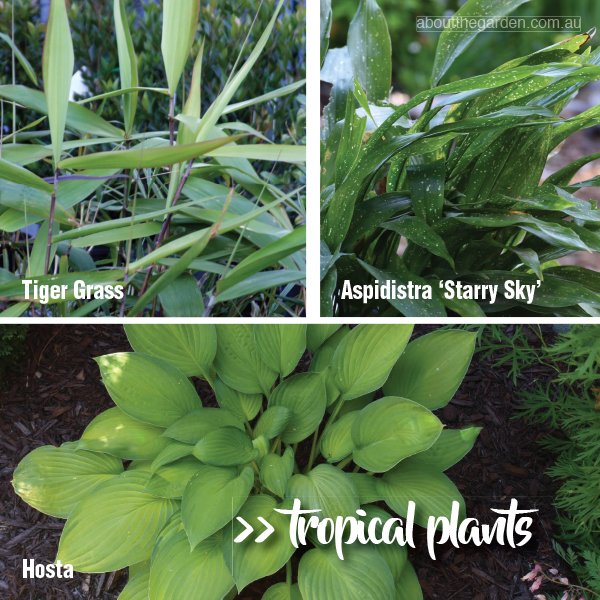 The old fashioned Aspidistra or Cast Iron Plant (Aspidistra elatior) ticks many boxes when it comes to garden design and the tropics are no exception. Viewed as one of the hardiest of all garden plants, aspidistras can bring lush foliage year round to any sized garden space. The deep green form is most easily recognised and found, but the variegated form brings with it a little extra charm albeit being a little slower to develop. Another lesser known cultivar of aspidistra from Japan is ‘Hoshi Zora’ commonly sold under the name of ‘Starry Sky’. This form has more slender foliage with each leaf speckled with small cream to soft lemon spots.  It is smaller growing than the regular form and interestingly looks great when planted alongside each other. Aspidistra enjoy a shady, well-drained position and are highly adapted to growing within or close by to more dominant roots systems from larger plants. They have a minimal water requirement while still maintaining a lush appearance.

To fill in a few spaces at the base of other taller species and to bring some extra seasonal colour into your “tropical” garden, consider using Clivia (Clivia miniata). While these evergreen clumping perennials can make a bold foliage statement at any time of year, it is their eye-catching large heads of brightly coloured blooms in all shades of orange, lemon and near red that seem to draw most of the attention from onlookers each spring. Tropical in origin, Clivia are capable of living in both cool and warm climates where they are perfect choices for filling out unused spaces that are prone to being slightly on the drier side.   They are hardier than what most give them credit for and can be very long-term additions to gardens, patios, balconies and verandas.  Provide them with bright, indirect light and a well-drained location.  Avoid the impulse to continually split up clumps as they form as they flower best when the clump is mature. The addition of a well-balanced granular fertiliser such as Searles Rose & Flower Plant Food for flowering plants in summer and autumn will encourage healthy colourful blooms each spring.

Tiger grass (Thysanolaena maxima) has often been confused as a bamboo, yet is a perennial clump forming grass up to three metres high and two metres wide. It makes a most desirable backdrop to the rest of the garden where it can quickly disguise ugly fences, walls or outbuildings and can really help showcase many other foliage plants. Tiger grass is quick to grow through the spring and summer seasons with a little extra irrigation, but when established, is very drought tolerant. It’s happiest in most parts of (frost fee) Australia, yet struggles in cold mountainous zones and Tasmania. 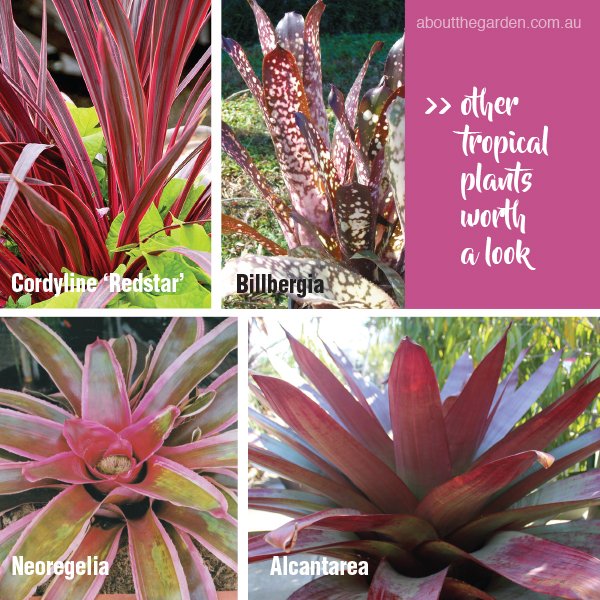 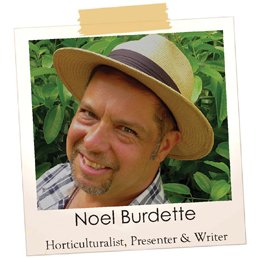 Noel Burdette is a highly respected Local horticulturist and plantsman in Se Qld and is well known for his love of naturalistic and softer style gardens . Apart from having his own Private garden consultancy service , Noel can be regularly heard on 1116 4bc talking gardening each Saturday morning and is a contributor to many local garden magazines such as Subtropical gardening , About the Garden and Queensland Smart Farmer (Rural Press) . He is also a regular presenter on the locally produced television programme Blooming in Brisbane” which airs each week on Digital 31. Noel holds a flag highly for healthy backyard ecologies and is often heard at many garden events, clubs and Societies throughout south East Queensland. On request, Noel also offers a private garden consultation and design service. Whenever Noel has the opportunity, he can be found eagerly tending to his own garden “Wildside” which is highly focused on healthy ecology and plant diversity. Visit Noel’s blog http://noel-burdette.com
Share
Previous Herbs that love the heat – Summer herbs
Next Growing Cucumbers 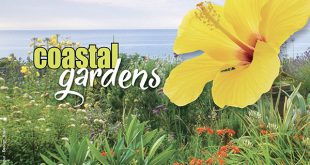 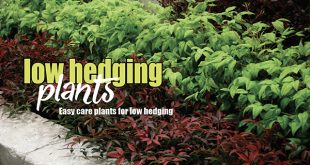 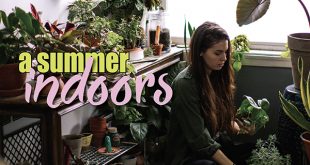 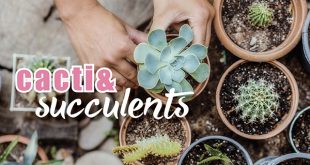 2020 About the Garden Magazines Archive